Who would have thought? It’s the first day of summer, and it looks like we’ve had a dusting of snow at Papa’s Pumpkin Patch! This “snow” fall is an annual event at Papa’s and for most of the Bismarck-Mandan area…at least where the giant cottonwoods are located. 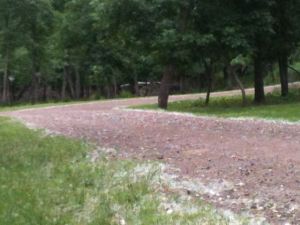 You see, about the middle of June, our cottonwood trees do what good trees do and start to reproduce. They generate a gazillion little seeds (that’s a gazillion seeds for each tree), and then they arm each seed with a mini cotton ball to carry it through the air to a landing spot where maybe, just maybe, it might take root.

With a bazillion gazillion of these little cotton balls floating around, it’s no wonder the driveway at Papa’s Pumpkin Patch looks like it got a light dusting of snow. The cotton flies everywhere and gets into everything — you hear frequent snorts by the horses trying to clear their nostrils, and even the dogs seem to sneeze more often this time of year.

In addition to the cottonwood trees, the onset of summer also means new life around Papa’s in other forms. We’re regularly seeing a doe in the Nature Trail, and one morning, Mrs. P caught a glimpse of a small, speckled fawn following close behind its mama. There’s also baby bunnies, baby robins and soon we expect to see baby turkeys and pheasants in the neighborhood.

With summer officially here, Mother Nature brings long warm days and the occasional thunderstorm to replenish the earth. We’ll keep you posted more frequently on what’s happening at Papa’s Pumpkin Patch; we’re starting to lock in on where your favorite activities will be located for 2013 and what new ideas we’ll be adding.